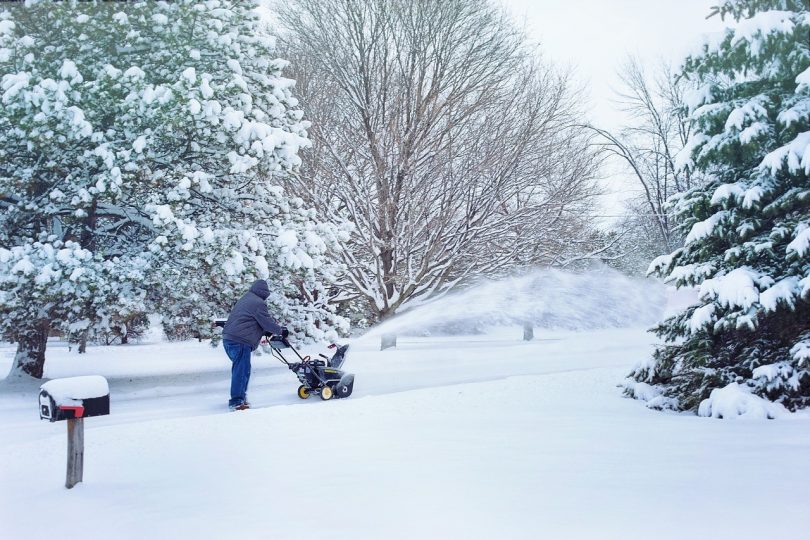 Snow covered hills and trees are part of the beauty of winter. Snow covered driveways? Not so much. We’re in for some heavy snow this year so it’s best to be prepared. Here are your top 5 options for keeping your yard and driveway snow free this winter.

Attach A Snow Plow To Your Truck

If you’re after the nuclear option then attach a snow plow to your truck or ATV and shift snow like a pro. These can be a little pricey but if you’ve got a large drive to clear and you’re short on time (or patience) then this is your best bet. The other benefit is that you get to clear snow from the comfort of the inside of your heated truck.

Also, putting your truck into first gear and powering through some snow is weirdly satisfying. The snow is going to pile up somewhere so this is only an option if you’ve got a good spot to push it to. Piling the snow in front of your neighbor’s driveway isn’t going to help you make friends.

If you want to shift snow as far away as possible then you’ll need a snow blower. These are great for lifting the snow from your drive and, with a little aiming practice, depositing the snow evenly around your yard. Gas powered snow blowers come in two main configurations: Single stage and two stage.

With a single stage snow blower the auger is in direct contact with the floor. That’s guaranteed to pick up gravel along with the snow and you’ll end up breaking windows and killing cats. A 2 stage snow blower has the auger lifted just off the floor so you only pull in snow, leaving gravel and stones safely on the drive instead of flying through the air. They are more expensive but you can pick up a decent model for under a $1000.

So you don’t like noise or fumes and you’re after a “greener” option. No problem. There are some really good cordless snow shovels on the market these days. Being battery powered means you do sacrifice some snow shifting power but these are fine for clearing lighter powder.

Snow Joe make some blowers that aren’t bad. If you don’t mind paying top dollar then EGO Power+ make some really powerful battery powered snow blowers that will handle some heavier stuff. With the constant improvement in battery and electric motor technology these cordless options are fast becoming more and more viable options.

Shifting snow with a manual snow shovel can be pretty tough going but if you only have a small section to clear it’s probably your best bet. You’ve been saying you need to exercise more, right?

Just take it slow and steady. Using a snow shovel with a short handle will take the pressure of your back and will help you maintain better form. Clear snow earlier in the day. If you leave it for later the afternoon sun could melt it a little and then you’ll be dealing with ice when it freezes again. Spraying some cooking spray on the shovel first will make it easier for the snow to glide right off.

Use Salt Or Sand To Melt Ice

Snow can be inconvenient but black ice can be downright dangerous. If you’ve ever experienced black ice when walking or driving you probably found this out the hard way. If you’re dealing with ice on your walkway, whatever you do don’t use hot water to try to get rid of it.

You may melt the ice initially but it will just form even more ice when it freezes again. Sprinkling about 1 teaspoon of salt for every 10 square feet or so will stop black ice from forming. You can use regular table salt or even dishwasher salt. Just don’t throw it on ice formed over your lawn if you’re hoping for it to grow again once spring arrives. Don’t have any salt? Throwing some sand or ash on the ice won’t melt it but it will give you better grip underfoot.

What’s the easiest way to clear snow? Well, the easiest way is just to pay someone else to do it. Consider hiring one of the youngsters in your community that are looking to earn a few bucks to pay for college.

The reality is that whatever method you choose, if you’re going the DIY route, then it’s going to take some time and effort. If you invest in some decent snow shifting equipment it’ll make your life so much easier and you’ll end up spending a lot less time out in the cold.